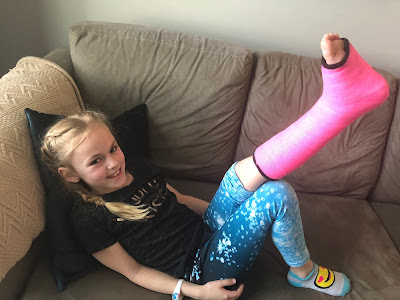 This girl. I’m constantly learning from her. Last week, I learned that she is so strong beyond belief, with an insane pain tolerance. I feel so horrible – she has fractured two bones in her foot and it’s so much worse than we thought! The Doctor said, “You must know, your daughter has the most incredible pain tolerance.” And, she couldn’t believe she’s been up and about, not crying, let alone doing gymnastics

😳 She barely complained for months, still working out and practicing, just icing. She has had some foot pain since February, but what competitive athlete doesn’t have pain, right?  And, the fact that she never cried about it, or limped, or let it impact her day to day activities made us believe she was going to be OK.  I finally had a feeling it was time to take her in for X-rays, but nothing showed up.  The 1st Doctor we saw suggested a boot for 2 weeks and then a MRI OR we could get a MRI right away.  He gave me a choice.  I am SO glad I chose to get the MRI right away ( my gut told me to! ) because if we would have waited, her foot could have gotten even worse.  One of the bones she fractured, the navicular bone, has a high risk of not healing, due to low blood supply.  Which, if not casted immediately, could mean surgery and even worse down the road.  So, we immediately got it casted and Sonoma can’t put any pressure on it. The other fracture is to the lateral cuneiform bone. 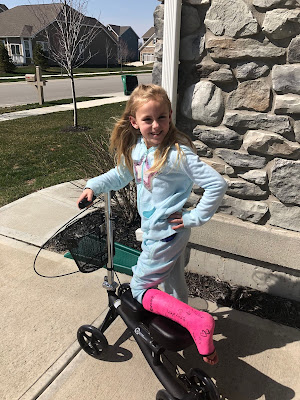 She makes this scooter look so cool! Crutches were going to be too big for her, and the Doctor thought she would like the scooter better. She has not once complained, maneuvering around town and school like a pro!  She told me it was a good thing I am in shape and that I better keep working out, because, now, I have to carry her up and down the stairs, in and out of the car, along with her scooter. It’s a lot of work since she can no longer ride the bus.  She is sad she can’t go outside for recess, do PE or play outside with her sisters.  I told her luckily the weather has been horrible out for Spring, ( she’s not missing much at all outside! ) and that at least it is not competition season or the middle of Summer.  We are praying she heals in time to at least get her cast off for her pool birthday party that we already sent out invitations to.  We know that even if she gets her cast off after 2 weeks, that she still cannot put weight on her foot for another 2 weeks after that.  We ended up switching doctors and I am SO glad we did.  Another gut instinct of mine!  Our new Doctor is a former gymnast and the Doctor for the U.S. Women’s National Gymnastics Team.  I feel very comfortable with her and she even comes to Sonoma’s gym once a month to see anyone with injuries.  She is hopeful Sonoma can be back to full gymnastics by the beginning of June.  When she starts rehab, she is going to really evaluate her to try to figure out why exactly she got these two stress fractures ( something with her foot or the way she is using it for her gymnastics skills? )  Sonoma has gone from 12+ hours in the gym a week, to just 1 hour a week doing abs now.  That is all she can do.  I can only imagine how tough that must be for her.  It is weird having her home an extra 12+ hours a week! 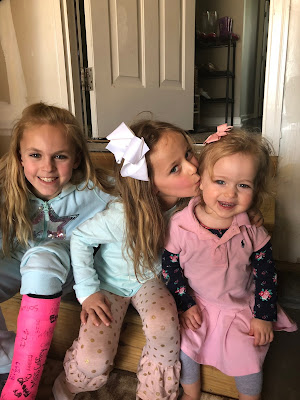 Sonoma has had such a positive attitude through this all, and even though she is very sad about her injury, we know that she will heal and recover.
SB2K18GA Cora Rides a Bike!