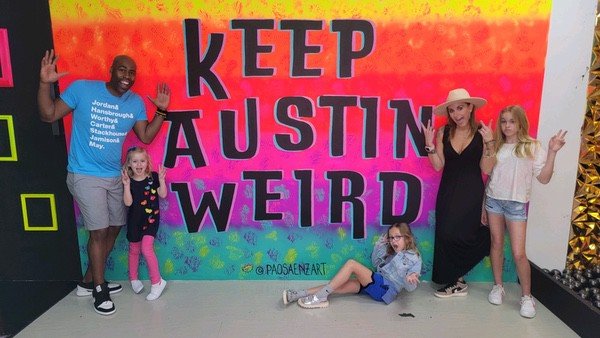 For Spring Break this year, we took a family vacation to Austin, Texas.  Both Douglas and I had been to Austin before, but not for long, and never together.  My children had never been to Texas at all, and I wanted to switch things up and explore a different city together.  Austin was such an excellent choice, as it really was the perfect Spring Break vacation for all of us.  It was filled with gorgeous weather, city life, pretty nature, delicious food and plenty of family-fun activities for everyone to enjoy! 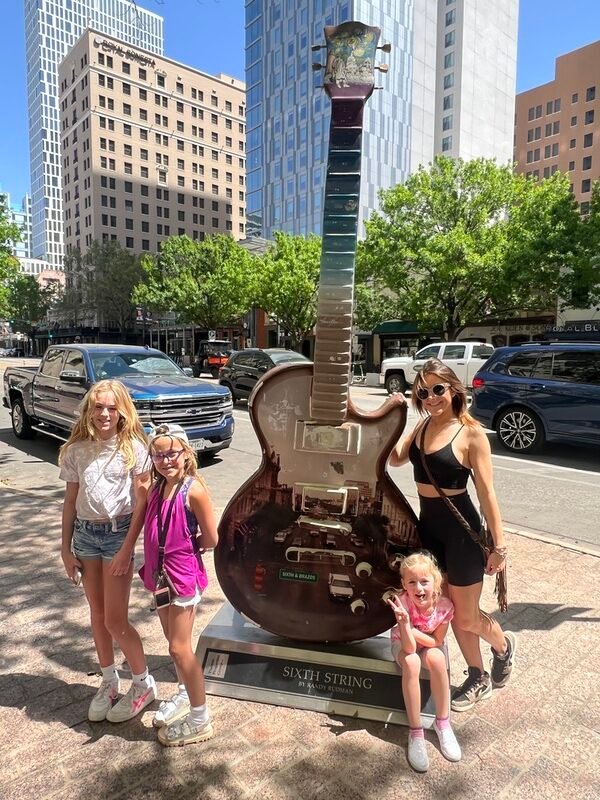 We stayed at the Club Wyndham Austin which is a brand new, all-suite hotel in the heart of the city with a rooftop pool!  The hotel has a family-friendly environment and proximity to great restaurants and attractions.  The Wyndham Austin makes it easy to enjoy the best of Austin.  We walked so many places!

If you haven’t checked out Snaptravel travel before, I recommend checking it out for discount hotels. You will get 10% off with this link using my discount code DR5OZKJ

The website does all of their communication through text messaging and it’s so easy to search for hotels. It is extremely user friendly.

We really lucked out with the hotel and having such a large, comfortable space for the week. We had 2 bedrooms, 2 bathrooms, a living room with a sleeper sofa, a large eat-in kitchen, and a fuse-ball  table next to the balcony out back that over-looked the pool and downtown Austin. 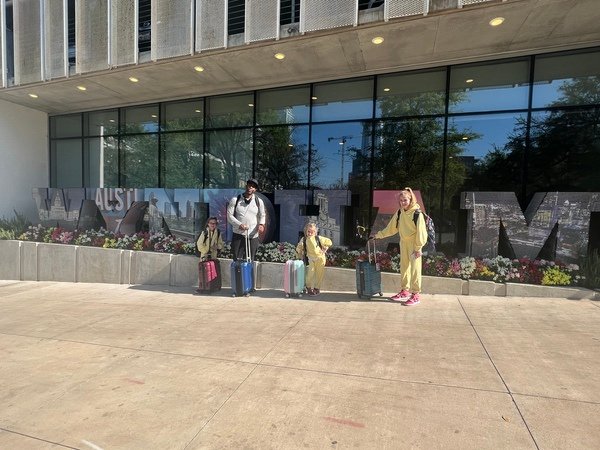 We spent time every day or night at the rooftop pool since the weather was absolutely perfect the entire week. It was in the 70s and 80s with a nice breeze and full-on sunshine.  We also loved all of the games in the lobby. That was a great thing for the kids to do during downtime or if we were getting ready or making food.  They had old school Pac-man, Nintendo, & Shuffleboard.  The kids loved it! 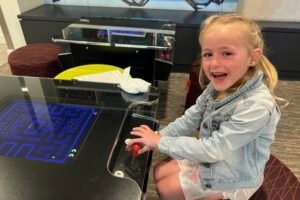 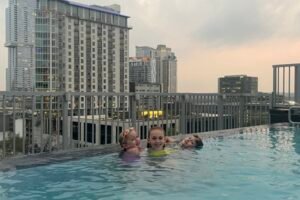 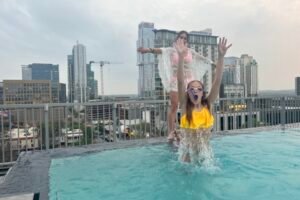 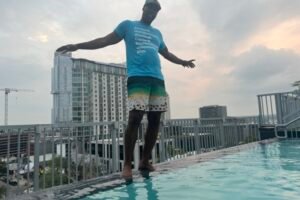 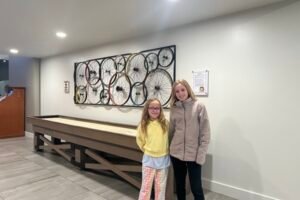 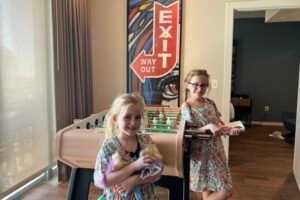 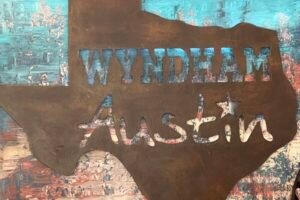 There were so many things we wanted to do in Austin!!  We had a very hard time deciding what to do because we had so many different places saved on our Google Maps List.  Here is a list of what we ended up doing for activities:

After walking around the city, we stopped here to let the kids play.  It was such a beautiful park with so much space and the city skyline in the background.  I thought it was the perfect downtown park.  They also had a splash pad, which is great for hot days!

We rented boats here and spent the afternoon on the lake, taking in the city views.  I was on a Swan paddle boat with my youngest two and boy was that a workout!  It was basically a spin class.  A lot harder than I thought. Douglas and my oldest daughter rented a kayak and that looked like a lot of fun and less work!

This is a brand new museum that opened up a month before we arrived in Austin!  We spent hours at this museum, as we all had so much fun taking selfies at all of the different photo set-ups.  There were back drops and ring lights and sets all over a two story house that was turned into a museum.  It was extremely clever and very on trend with all the selfie walls you see everywhere nowadays.

The beautiful downtown lake to cruise around on or hike around.  Everyone in Austin is outside and active.  I love the free spirit, outdoorsy vibe in this city.

This was another really cool museum that we spent a few hours in one afternoon. Although expensive, it was so unique and worth it!  We tried a lot of really delicious, different ice creams, as well as other treats along the way.

This was a beautiful botanical garden complete with fish, butterflies, waterfalls and gorgeous flowers and trees.  It was huge and took a long time to go through. The girls loved it though!

-I love you so much Mural

This bridge was really fun to walk over.  It was filled with runners, bikers, dogs, and even live music.  We took some pretty pics of the city and water while on the bridge.

We really wanted to swim at this outside spring pool, but we didn’t get a chance due to their strange hours one night.  It sure was cool though! We walked around it.

Although some of the worst laws in history have been made here, we wanted to see the country’s largest capitol building.  It was a good teaching moment for my children about the history of the state.  The architecture is really pretty.

The food scene in Austin was really good, but it was especially good for plant-based food!  I couldn’t believe how many food trucks were everywhere!  We didn’t have a bad meal there!

Here were the restaurants we went to:

A vegan food truck that serves Mexican cuisine.  It was located in a grassy area with other food trucks and local art by Black artists.

The Food Network ranked this place in the top 10 places to get the best French fries in America.  They were delicious but nothing compares to The Oakmont’s fries in my opinion!

We picked this spot down the street from our hotel for pizza night and to watch the basketball games.  It was New York style pizza and we all loved it!

All in all, Austin was a WIN for Spring Break.  I am so glad we planned to go to a new city and experience something different!  It was a great family vacation and we all can’t wait to go back.  We could have stayed another week!